The true economics of a third runway

From the very beginning of Heathrow Airport’s massive lobbying campaign for a third huge runway, economic benefits to the UK have been claimed by Heathrow to justify it. These claims are utterly misleading as shown by the Department for Transports (DfT) detailed analysis which we explain below.

But, shamefully, DfT has supported Heathrow’s lobbying by systematically quoting partial and misleading figures of economic benefits in its consultations and public documents.

If the DfT had wanted to present a balanced truthful picture, it would have quoted in its main public documents at least the headline figures from its detailed analysis. Instead it resorts to qualitative statements with a few spurious statistics thrown in. This is clearly designed to mislead MPs, councils, business leaders and the public alike.

We describe below the great “economic benefits swindle” and other economics mis-information. These culminate in the National Policy Statement (NPS) presented to Parliament on 5th June 2018.

For major infrastructure projects, the standard method of evaluation is to calculate a ‘Net Present Value’.  This looks at all the costs and benefits, direct and indirect to the public, consumer and providers alike. Allowance is made for the timing of the costs and benefits and the costs are subtracted from benefits to give a final Net Present Value or ‘Net Economic Benefit’. See  Economic benefits – NPV . If the value is negative or close to zero, the project should be rejected.

The NPV approach was used by the DfT and shows a Net Economic Benefit of -£2.5 bn to +£2.9 bn. So the economic benefit could well be negative. See Truth about economic benefits of 3rd runway

But even the upper figure of the range is negligible.  Compare it with our Gross Domestic Product of about £1.5 trillion every year.  Any impact on our economy and growth is negligible.  Even this upper claimed economic benefit is equivalent to just a fraction of the cost of a cup of coffee at the airport for each passenger! 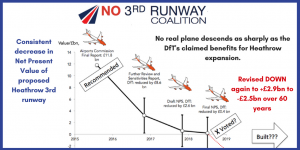 But even in its latest estimate, DfT has
£      left out costs of congestion impacting on non-airport users to a value of £25bn
£      omitted proper costs of climate change
£      fiddled the estimate of noise costs
£      included international transfers as benefits, despite DfT’s own advice not to

DfT did not dare to show the real figures because they would have make the Net Economic Benefit massively and unequivocally negative. Thereby undermining the lobbying of Heathrow and the policy of  DfT’s political master, Chris Grayling.

Instead of presenting Parliament with its own carefully researched evidence, DfT resorted to hype and soundbites in the NPS in its bid to support a third runway.  Where it does quote figures they are partial and therefore misleading. For example, the NPS (para 3.26) quotes “total benefits .. of up to £74 bn ..”  But this leaves out all the costs.  Of course one can show benefit from a scheme if one quotes only the benefits and not the costs. On this basis, bank robberies could be claimed as beneficial to the UK economy!

An even bigger swindle is the claims about “wider economic benefits”. These are benefits to the economy, mainly due to trade and increased productivity, that would not be captured by conventional cost-benefit analysis. The Airport Commission commissioned a study which claimed large figures such as £211bn and £147bn but these have been completely discredited and rejected by the DfT. The DfT figure for “wider economic impacts” is now just £1.8bn to £3.1bn – a colossal reduction. But this has not for a moment stopped Heathrow and its supporters quoting the discredited figures.

The great tax dodge in the sky

Air travel enjoys massive tax exemptions.  Tax-free fuel alone is worth £10bn pa. See Economic benefits -Truth  (para 6 + endnotes). If aviation were taxed at the same rate as other sectors of the economy, the money could be invested in public services or infrastructure in the regions. Or it could be used to help poor people, who do not fly, instead of subsidising the affluent.

These tax exemptions subsidise cheap unnecessary flights and inflate demand. If aircraft fuel were taxed at the same rate as petrol, demand would be reduced by 36 million passengers pa. See Economic benefits -Truth (para 7 + endnotes). This is considerably more that the extra traffic of 29 million generated by a new Heathrow runway. To put it bluntly, the “need” for a new runway is based on a tax dodge.

Needless to say, the tax advantages of air travel and the extra tax avoided due to a new runway are not mentioned in the NPS.

So who is responsible for this campaign of misdirection and misinformation? Here.