Surface access – getting to and from Heathrow – is one of the biggest issues surrounding a third runway. With about 40 million extra passengers every year, huge strain would be placed on roads and railways. Without drastic action, especially new rail access, there would be more congestion and more pollution. This would affect new and existing airport passengers and, much more importantly, ordinary citizens going about their daily business. 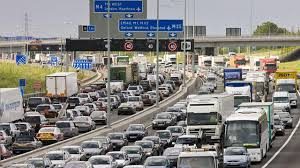 No such drastic action is planned.

The National Policy Statement (NPS) is heavy on rhetoric but light on action (para 5.5- 5.22). It just requires Heathrow to come up with a plan to increase the proportion of journeys by public transport, walking and cycling to 50% by 2030 (para 5.17). There is no indication of how this would actually be achieved, bearing in mind the crucial fact that Heathrow has no powers or authority over road and rail outside the airport.

The public transport target is just an aspiration. There is no evidence of intent.

The Airports Commission concluded that some £5bn would be needed for infrastructure such as roads and railways. Heathrow told the Environmental Audit Committee that they were prepared to put in £1.1 billion. DfT then reduced the estimated cost of infrastructure by £1.4bn to £3.4bn.  This reduction occurred – very tellingly – after minister Chris Grayling intervened, following concerns about taxpayers having to foot the bill.

Meanwhile, Transport for London estimated a figure of £10 to £15bn (NPS Consultation Response: Thematic Paper, Surface Access, May 2017). This is the cost of road and rail schemes needed to achieve a modal shift to 65% public transport. Only that level would ensure that there were not serious impacts  on existing infrastructure and on non-airport users.

The effect of reducing the amount to be

spent on road and rail, as Chris Grayling has done, is simply to increase traffic and congestion on the existing roads and railways. This impacts on non-airport users and would generate a large economic cost in its own right. So savings on infrastructure are replaced by congestion costs. Richmond Council has estimated that the cost of congestion with currently proposed road and rail schemes would be £25 billion.

The government proposes a new runway with completely inadequate road and rail access.  Hardly a “world class” airport!  Congestion and pollution would be dumped on the millions of people who live in the shadow of Heathrow.

OR .. the taxpayer will be required to fund the road and rail schemes to that ought to be paid for by Heathrow and its passengers.

MPs and the public are being conned and misled!

So who is responsible for supporting a scheme without a credible surface and misleading MPs and the public.  Here’s who.