The Court of Appeal has found in favour of the campaigners – including Friends of the Earth – who took the government to court over the third runway. The key argument was that the government in its National Policy Statement (NPS) had failed to take into account the ‘Paris Agreement’.  The Paris Agreement is an international agreement, signed by UK, to reduce CO2 emissions to zero by 2050 and thereby prevent catastrophic climate change. 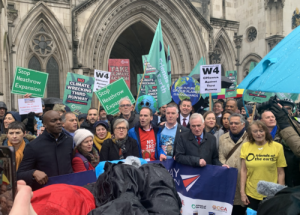 Lots has appeared in the press and the airwaves, so no need to repeat here. But interesting to see that even the Financial Times sees this as a landmark:  “The decision is not just a setback for Heathrow’s backers. It also holds implications for future infrastructure projects: the government will have to consider such proposals in light of its climate pledges, or risk being open to legal challenge. It is a landmark moment, one that brings a much-needed dose of reality to Britain’s commitment to reduce its carbon emissions to almost net zero by 2050.”

This judgment DOES NOT mean that a third runway is of itself unlawful or must be cancelled. It simply means that the NPS has to be revised to take account of the Paris Agreement. However, this has very important implications:
a) Boris Johnson is thought to be unenthusiastic about a third runway. This judgment gives him the opportunity and ‘political space’ to remove government support for Heathrow expansion.
b) it is huge precedent in the fight against climate change. The court said, in effect, that if the government signs an agreement on climate change, it is obliged to actually take account of it when developing  plans and policies on carbon-emitting projects.