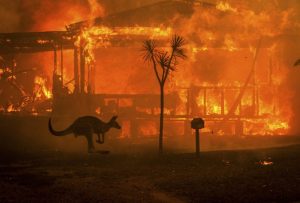 Huge areas devastated, people killed, an estimated billion animals die and what’s the response of Australia’s appalling prime minister, Scott Morrison? The New York Times tells us: “Why Australia is burning: As firefighters battle flames across the country, Australia’s prime minister is fighting to keep climate change out of the conversation.”

Hard to imagine, but his deputy Michael McCormack, is even worse. A climate denier, he characterised people talking about climate change as “inner-city raving lunatics”.

Australia’s leaders are appalling, but Britain’s leaders are little better. Their response to the climate emergency is to brand the group campaigning for action on climate change – Extinction Rebellion – as terrorists!

As the Independent says “Priti Patel’s [Home Secretary] listing of Extinction Rebellion as a terror threat is as alarming as it is comical.”