The consultation on the government’s draft Aviation Strategy closed on the 20th June. West London Friends of the Earth (WLFOE) has responded to the consultation.

The strategy is, to put it frankly, appalling. We say in our response “We are fundamentally opposed to the overall thrust of the strategy, which is basically ‘growth at any cost’. “

Key environmental issues of noise, air pollution and climate change are of course mentioned. But there is no real plan to address them.

All we are offered is a ragbag of ideas.  Individually, many of the ideas are laudible, but none of the proposed measures will of themselves individually or collectively ensure that noise, air pollution or climate change standards and targets are met and thereby human health protected.

The justification for this growth is –  predictably – economy and jobs. But, extraordinarily, no real evidence is presented. There is much assertion and hype with a ragbag of largely irrelevant statistics thrown in. But what is conspicuously missing is an estimate of the Net Economic Benefit – that is the overall benefit taking into account all costs and benefits.

We know why this is missing.   A proper economic study was done for the government’s ‘flagship’ project, a third runway at Heathrow.  The result was a ‘Net Present Value’ of approximately zero.  That is, no net economic benefit to the UK.  (And even that was obtained only by leaving out all the climate costs and some of the surface access costs.) The government dared not do a new study to support this aviation strategy in case it too came up with ‘the wrong answer’.

The government is unable to justify with evidence or rational argument its gung-ho pro-growth policy. Given this, the only explanation is ideology.  Its disregard for people and the planet, shown by its complete failure to address noise, air pollution and climate change, is a further manifestation of government ideology.

See here  for full West London response to the consultation.

We went to a meeting on 2nd June with the new ‘Independent Commission on Civil Aviation Noise’ (ICCAN) yesterday.  4 very ‘establishment’ commissioners. Two were Tory council leaders, one a Rear Admiral and industry advisor and one a senior local government officer who then had other public posts. 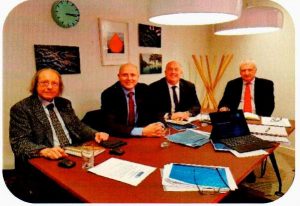 Hard to imagine they will “challenge” [their word] Heathrow, government, Department for Transport or the industry.

The emphasis seems to us entirely wrong. ICAAN wants to “improve confidence and public trust in the management of aviation noise.” Surely the aim should be to “minimise aircraft noise and its impacts on people.”