The Greater London Authority (GLA) has included in the Draft New London Plan text which makes clear the Mayor’s current opposition to Heathrow expansion and conditions under which it would be acceptable. Heathrow Airport wants the text deleted on the grounds it is “inconsistent” with central government policy.

West London Friends of the Earth and others appeared at the hearing  on 10/5/19 to defend the GLA’s right to be able to state its policy and views. 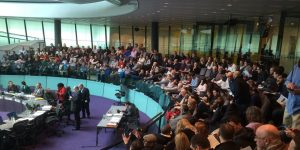 The Mayor is democratically elected and it is absolutely right that that the London Plan should explain the Mayor’s views and policies. Heathrow’s attempt to censor these is another blatant attack on local democracy.

Previously Heathrow (via its ‘front’ organisation, Back Heathrow) has attacked local councils such as Hillingdon for “wasting” money opposing a third runway.

Councils are democratically elected and have the right, indeed duty, to represent residents, citizens, taxpayers and voters. Unlike Heathrow Airport, whose only responsibility is to make money for its owners and directors. If councils are concerned – as they must be – about noise, air pollution and congestion and about the health and quality of life of their citizens, they have every justification for spending a relatively tiny amount of money on opposing a third runway and trying to protect their citizens.