A detailed new study shows strong links between air pollution and loss of ‘cognitive intelligence’. While the study cannot prove air pollution is the culprit, the researchers consider it likely.

This adds to concerns about the effect of air pollution on health, which are already well recognised.  The BBC report notes that: “about seven million people die every year from exposure to polluted air” and “air pollution caused 4.2 million deaths globally in 2016“.

The World Health Organisation (WHO) sets ‘guideline values’ to minimise impacts of air pollution. Link.  However, these values are largely ignored by Heathrow and its pals at the Department for Transport because they are are much less stringent than EU ‘limit values’.

Back Heathrow, the front group for Heathrow Airport, has launched an attack on local democracy.

It is criticising local councils for launching a court case (Judicial Review) on Heathrow expansion. The attack was led by ex Labour MP Parmjit Dhanda. (See, for example, R&T Times.)

Nic Ferriday of West London Friends of the Earth commented “Heathrow has spent some £30 million promoting a third runway with a massive lobbying campaign of propaganda and mis-information. Yet when democratically elected councils choose to oppose it, they are accused by Heathrow of wasting taxpayers’ money.

It is absolutely not for a Heathrow funded organisation (purporting to represent local people) to try and dictate to democratically elected Councillors how to allocate their budgets. Councillors have every right to try and protect, among other things, the lives and health of the people they represent.

Particularly ironic is that Heathrow expects the taxpayer to spend vastly more to support its expansion than any legal costs. It expects the taxpayer foot the bill for the necessary road and rail schemes, estimated at £5 billion to £10 billion. And to pay the costs of the extra noise, air pollution and congestion.”

Friends of the Earth has launched a High Court legal challenge to Heathrow expansion. This is on the grounds that the Airports National Policy Statement (NPS) fails to address climate change. 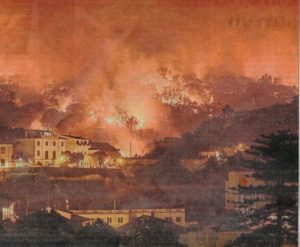 This picture – of the fires in Portugal – illustrates why FOE feels the need to challenge the government on Heathrow expansion.